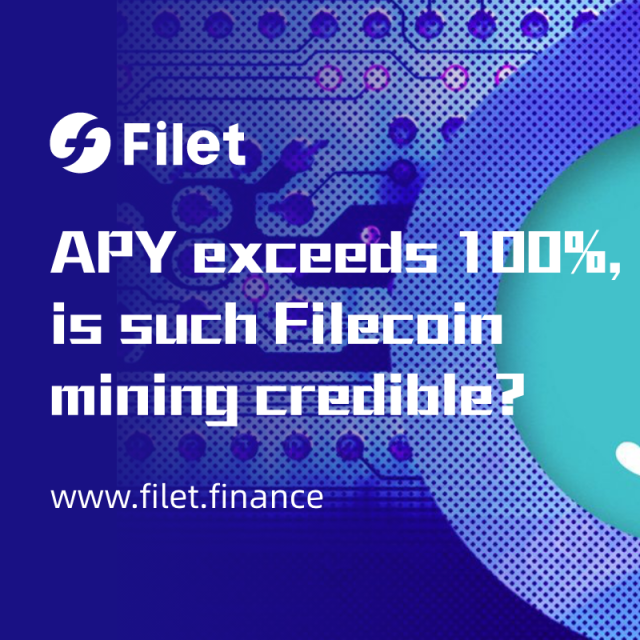 Since the launch of Filet staking mining, it has gained widespread attention in the market. Many users have staked their FILs for mining. At present, the staked amount has exceeded 100,000 FIL.

However, recently, there have been ads about Filecoin staking mining with an APY of more than 100%, which seems to be far more attractive than Filet. If you look closely, you will find such promotions must be a scam. Users are willing to believe this scam because they do not understand the underlying logic of Filet’s staking and mining and believe that Filet is like other asset management platforms, users’ earnings are from the interest of FIL. But it’s not, all of Filet’s earnings come from Filecoin mining, and its essence is also the same word – mining.

Where did the FIL Staked by Users Go?

As we all know, it is not enough to have the equipment and maintenance, Filecoin mining also requires a certain amount of FIL to be staked in advance before mining can begin. The FILs staked by users are not officially invested or managed by Filet but act as the staked token required for Filecoin mining, that’s why we say the essence of Filet is mining. After the mining revenue is generated, the Filet official distributes the mining output to users according to the amount of FIL staked by users.

This mode determines the security of users’ investment in Filet. In wealth management platforms, the assets staked by users can be sold in other wealth management channels or in the secondary market to earn profits, the risk will be very high, and it may even lead to the loss of everything. However, Filet’s staking and mining have absolutely nothing to do with the market. There is almost no risk, and users will get the corresponding mining income with no loss of the principal.

Is the Ultra-high-APY Filecoin Mining Credible?

Since the Filet users’ income comes from mining, the APY has a limit, and it is impossible to get the ultra-high APY as advertised by the fraudulent projects. Moreover, since the mining output of Fileoin decreases with time, the APY also keeps decreasing.

This is the curve of Filecoin’s mining output per TB in the past year, which has dropped from 0.07FIL to 0.0178FIL, a drop of 70%. In the past six months, it has dropped from 0.0262FIL to 0.0178FIL, a decrease of 32%, and will continue to decline in the future. Therefore, it is impossible for the annualized income of Filecoin mining to get such a high level. Therefore, it is clear that those Filecoin mining projects advertising ultra-high returns are unreliable.

In addition, the Filecoin mining mechanism also tells us that the sooner FIL holders join in Filecoin mining, the more benefits they can get. In short, users need to carefully identify the authenticity of the project before joining Filecoin mining. Don’t be blinded by ultra-high returns.